The Time Is Now

A couple of days ago, one of my best mates had a heart attack. He was out surfing when the event started to unfold. Being the tough old bugger that he is, he tried to continue surfing. His “day on the water” wasn’t going to be disrupted because he felt lousy. 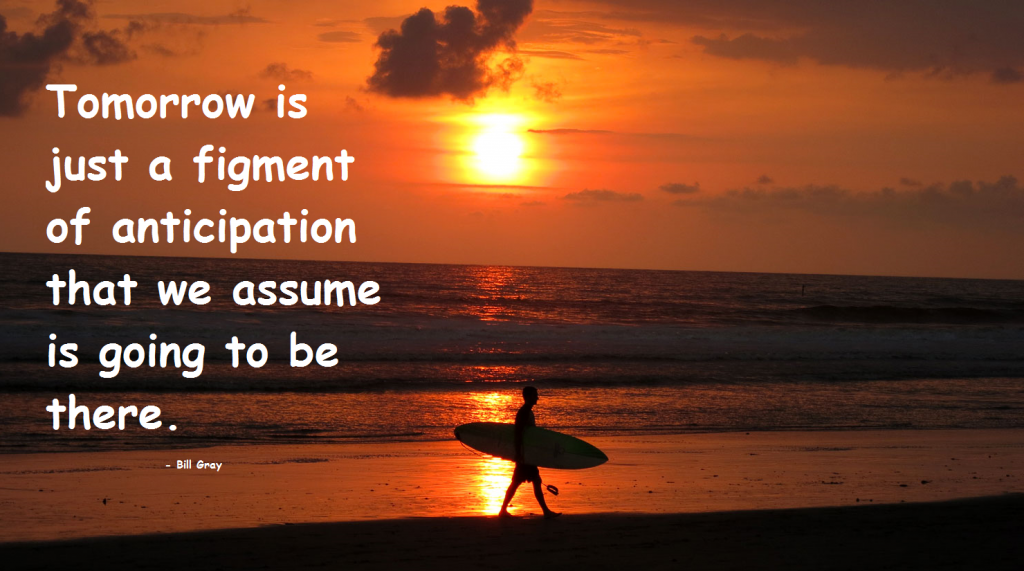 Talking to him afterwards, he didn’t have any of the classic signs. He was just exhausted and put it down to not having surfed for a number of days.

When he finally gave up surfing for the day and made his way up the beach to home, he did what any self respecting gentleman would do, he cleaned his car, packed up all his surf gear and then went for a walk with his old man.

It was now that reality sort of set in. He couldn’t keep up on the walk and so they turned around and struggled home.

He was still putting this down to him just feeling lousy but it was now that he called an ambulance.

When the flashing lights arrived, the paramedics were quick to deal with the matter and he was rushed to hospital.

As he told it, they didn’t waste time going round the round-abouts. So I am guessing they had taken his condition as pretty serious. He is not out of the woods yet and goes in to theatre later today for a “look around”. He was in high spirits this morning.

This turn of events for my mate, made me think quite seriously about the things we all want to achieve and the things we continue to “put off till tomorrow”.

I looked at the list I have and it is a great list. This list isn’t so much a bucket list but just everyday things that procrastination managed to tell me, aren’t really needed to be done because there is always tomorrow.

I am a great believer in “yep, lets do it” and then figuring out how to “do it” as we go along. but even so, I have put off so many things because of procrastination and just wanting to have a day off.

Recently, my partner and I made a decision to move back to New Zealand from the idyllic surroundings we have here on the Far South Coast of NSW in Australia. Candelo is the town, if you are passing by. An awesome spot filled with awesome people.

The call of family seemed to hit us both, and, as we were ready for a new adventure, we put the steps in motion and now the change is close to happening. The events of the last few days have reinforced the idea that we made the right decision.

So often, I hear people saying “I’m going to do that before I die” …well let that idea sink in for a minute… I know I have said that many times as if I knew when that magical time was going to occur. The fact is, none of us know precisely when we will get the call. Tomorrow? the next day? 10 years? What do you want to do before you die?

Just get off your ass and do it now, work towards it, carry it out.

Not the little things, but the good shit, like catching up with family and friends, enjoying my push bike rides, going on my camping adventures, telling crap jokes and seeing my mates laugh even though they have heard those same jokes many, many times before. Just doing the stuff I enjoy.

Sure we have to work, but we can play a hell of a lot more too.

Make choices that you want and make your dreams come true and do it now.

Tomorrow is just a figment of anticipation that we assume is going to be there.